Baroness Onora O’Neill, who has dedicated her career to investigating trust and justice in public life, has been awarded the UCD Ulysses Medal by University College Dublin. 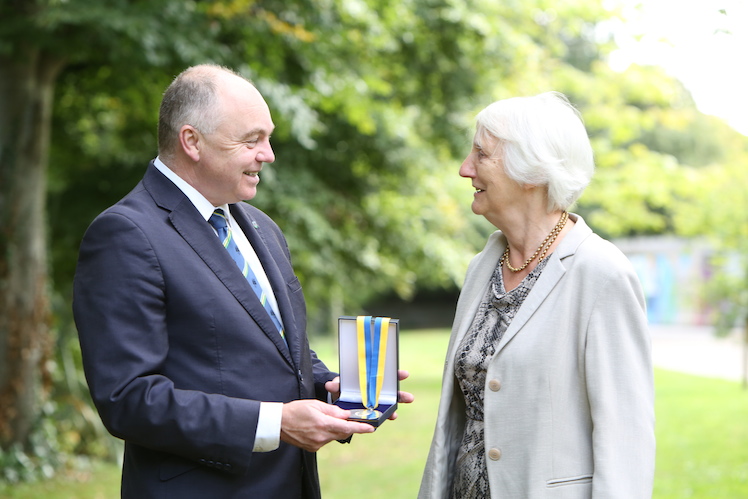 Baroness Onora O’Neill, who has dedicated her career to investigating trust and justice in public life, has been awarded the UCD Ulysses Medal by University College Dublin.

The medal is the highest honour the university can bestow. It was inaugurated in 2005 to highlight the creative brilliance of UCD alumnus James Joyce, who graduated in 1902 with a degree in English, French and Italian.

Baroness Onora O’Neill, Emeritus Professor of Philosophy at the University of Cambridge and life peer of the House of Lords, was presented with the award by UCD President, Professor Andrew Deeks. The official citation was read by Professor Maria Baghramian, Professor of American Philosophy at the UCD School of Philosophy.

In 2017, Baroness Onora O’Neill was named winner of the Holberg Prize. The honour is worth €485,000 and is awarded by the Norwegian government to outstanding scholars in the arts and humanities, social science, law or theology.

Baroness O’Neill came to the attention of the public when she delivered a five-lecture BBC series examining trust and accountability in government and institutions in a post-9/11 world. Titled A Question of Trust, the series was broadcast in 2002 as part of the BBC’s Reith Lectures.

In 1999, she became a life peer in the House of Lords where she helped to shape the United Kingdom’s policy on stem cell research and human tissue use. She was chair of the UK Equality and Human Rights Commission from 2013 – 2016.

Baroness O’Neill has written 11 books on issues surrounding global justice and human rights. These include Faces of Hunger (1986), Bounds of Justice (2000) and Justice across Boundaries: Whose Obligations? (2016).

Born in County Antrim, Northern Ireland, Baroness O’Neill completed her undergraduate degree in philosophy, psychology and physiology at the University of Oxford. She also studied at Harvard University.