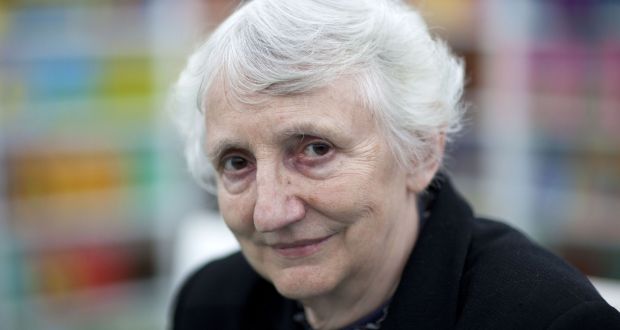 Onora O’Neill: ‘We have some very skilful faking going on’

It’s getting harder to distinguish between truth and lies but ‘people can learn to make better judgements’ about who to trust, says the Northern Irish philosopher

Those opposed to Brexit, in looking for an explanation of the UK referendum result, are fond of highlighting former Tory minister Michael Gove’s claim that “people in this country have had enough of experts”.

The comment is spun as an admission by the Leave campaign that it stands firmly on the side of idiocy and unreason. But philosopher Onora O’Neill believes that something more complex is going on, and that Gove – “clever man,” she mutters – was trying to make a different point entirely.

Co Antrim-born O’Neill, who describes the 2016 referendum result as a “disastrous moment of self-injury”, notes that Gove’s controversial remark came at a time when various economic models were being used to explain the costs of Brexit. “Well, economic models are not the way to communicate with the public at large, and I think that was a big political error. Experts in that context is probably what that Gove had in mind.”

More importantly, she says, there’s little evidence that the general public has lost trust in experts. “If you have a grumbling appendix and I say, ‘Oh, I know a very nice chap at the dry cleaners, he’ll take it out for you’, you’d say, ‘No way!’” She continues: “People seem very keen on getting their children educated and qualified; that would make little sense if we thought expertise was of no use at all.”

The reasoning is classic O’Neill (76), emeritus professor of philosophy at University of Cambridge, who is visiting Dublin this month to speak at a major research conference on “Trust, Expert Opinion and Policy”.

The evidence usually cited for problems with trust is pretty flabby

She has made a lifelong habit of questioning fashionable assumptions, especially those repeated by fellow travellers on what might be called the progressive wing. In a famous series of BBC Reith lectures in 2002, she challenged the claim that western society was afflicted by a “crisis of trust” while simultaneously turning one’s understanding of the concept on its head.

Then, as today, she highlighted the paucity of evidence showing trust was in decline. “The evidence usually cited for problems with trust is pretty flabby because it tends to be the opinion polls,” she says. These have been “pretty invariant”: trust in judges and nurses has always been relatively high, and politicians and journalists relatively low.

Even then, the polls measure “generic attitudes which don’t have to be evidence-based. So people can say they don’t trust banks but say, ‘Of course I have a bank account.’”

‘Culture of suspicion’
If there has been a change in recent years it is the emergence of a “culture of suspicion”, she claims. “People used to say there was a cultural of deference; I’m not sure that’s true but today people feel much more grown-up, let’s say, if they are suspicious rather than trusting.”

Allied to this is the deeper problem of how to reconcile disagreement in the public domain. Philosophers have for decades been troubled by a drift towards moral relativism – the idea that all ethics is personal – and O’Neill shares the concern.

One consequence of the relativist outlook is that it turns every truth claim – whether it is made by a priest, a politician or a policy expert – into a power grab; anyone proclaiming to be objective is acting in bad faith.

“You can see Nietzsche as a harbinger but you can also see it in GE Moore’s Principia Ethica – these very personalised views of ethics. When you cut ethics away from duty you end up with ethics that are purely subjective; it becomes my values against your values.

“For reasons we can trace historically, duty has become almost a dirty word – not in the church, not in the law perhaps. But, by and large, people prefer to talk about that much more charming notion: rights. So instead of asking, ‘What ought I do?’ – that great Kantian question – they ask, to be blunt, ‘What do I get?’”

She quotes from WB Yeats’s An Irish Airman Foresees His Death, “a poem I love . . . where he says, ‘Nor law, nor duty bade me fight/Nor public men, nor cheering crowds.’ That’s part of the World War I rejection of duty. I believe the fact that duty has been over-identified with patriotic duty is what brought it, in some ways, into disrepute.”

O’Neill is the daughter of diplomat Sir Con Douglas Walter O’Neill, who 50 years ago led the British delegation which negotiated Britain’s entry to the EEC. A life peer since 1999, when she became Baroness O’Neill of Bengarve, she has held various public roles including chair until last year of Britain’s Equality and Human Rights Commission. “It was not an entirely comfortable role for me,” she admits. “I have great respect for the European Convention on Human Rights but some of its interpretations have become tendentious and ill-guided, and the human rights – what shall I say – enthusiasts will elevate just any ill-drafted instrument to be above all law.”

The Brexit vote was partly influenced by “quite understandable irritation about some of the decisions” of the European courts, she says. “I think it is very unfortunate to imagine rights will be respected if you continually try to maximise them. For rights to be respected they have to be relatively clear and crisp, and not trying to do everything – and not, for example, undermining the rule of law by not allowing you to deport somebody, and having to put them under round-the-clock surveillance instead at vast public expense. I think the non-deportation of people who were citizens of other countries on the grounds that their human rights would not be respected in other countries was giving, as it were, the whip hand to countries that do vile things.”

Intellectual armour
Expressing this sort of view is quite likely these days to attract a social media hate campaign but O’Neill has formidable intellectual armour and, besides, as a self-proclaimed “unrepentant, card-carrying old Kantian”, she is quite used to being uncool. That includes resisting claims of victimhood. Asked about her experiences of gender inequality, she replies: “Yes, of course, earlier on I have met discrimination; any woman of my age has. But most of what is being spoken about as discrimination – or unlawful discrimination – is about a proportion of people in various sorts of posts.” A gender or ethnic imbalance “is always relative to a pipeline of people” who entered the profession, and one never hears complaints when a supposed minority is overrepresented in an academic field. The bottom line, however, is: “Proportionality is not the test of equality. Proportionality is a test of things like lotteries.”

Returning to the question of trust, O’Neill says knowing who to trust has got harder “because we have some very skilful faking going on, and Mr Trump’s chaotic administration is a fine example. So I take seriously, not this sort of modish vocabulary that we are living in a ‘post-truth society’ or that everything is fake news but, that it’s extremely hard to distinguish between genuine and fraudulent claims.” People can learn to make better judgements, however, and she argues that before trusting any putative expert you should look out for three things: “Honesty, reliability, and competence.”

To bolster trustworthiness, she says, intelligent forms of accountability need to be developed rather than using today’s “crude” performance indicators, or insisting on transparency at every turn. “Transparency doesn’t do what people fantasise it does.” The best approach, she argues, is for professions to regulate themselves in a robust way, and with external oversight.

I don’t like The Guardian at all; I think it is tendentious

O’Neill gave evidence to the Leveson inquiry into the newspaper phone tapping scandal and wholeheartedly endorses its recommendation for an audited regulator of the press. To her dismay, “a ridiculous self-regulating body” in the form of the Independent Press Standards Organisation (Ipso) has been set up instead.

“I think it’s very self defeating and I have to say I do not enjoy reading most UK newspapers and, this is perfectly genuine, I enjoy The Irish Times more. I feel unable to read on the whole any of the Murdoch papers other than The Times, and I don’t like The Guardian at all; I think it is tendentious . . . Far too many of its columnists are opinion-piece people whose opinions one has met and one would like to read from time to time but not constantly.”

That’s the trouble with experts (and O’Neill can count herself as one in the field of public policy): they make statements that can cause upset or discomfort. Was that a reason why experts got short shrift during the Brexit campaign? Was it the case that people didn’t want to hear unpalatable things about beef imports or the Border? “Absolutely,” O’Neill replies, “and people don’t want to hear what the oncologist has to say.”

Onora O’Neill gives a keynote address at the three-day conference “Trust, Expert Opinion and Policy”, which starts at UCD on August 31st. The event is the centrepiece of a two-year research project, When Experts Disagree, supported by the Irish Research Council. whenexpertsdisagree.ucd.ie